I believe I've read that Tom Wicker dictated this story, which would make sense, since it was 1963 and I don't think anyone in the field was using even the old Radio Shack "Trash 80s," on which you could see all of six lines of your story at a time.
Anyway, I wonder if that's why the piece is so unadorned and reads so much like he's talking to you. Of course, no one would dictate a story like this (or would want to) these days. But it's a great lesson on lean writing. As an exercise and to build writing muscle, try listening to yourself as you write, and try to go lean like this.
Kennedy Is Killed By Sniper As He Rides In Car In Dallas; Johnson Sworn In On Plane: Tom Wicker |
New York Times |
Nov 1963

Tom Wicker was without a notebook on November 22, 1963. Instead, reported Gay Talese, he “scribbled his observations and facts across the back of a mimeographed itinerary of Kennedy’s two-day tour of Texas.”

[full story]
Posted by Unknown at 1:14 PM No comments: Links to this post

I was fiddling around on a website called Intersect the other day, because I'm bound to at least investigate anything that bills itself as a new way to tell stories.

While I was there, I was surprised to stumble across a set of stories based in York. The stories, by Washington Post photojournalist Michael S. Williamson, were small riffs on info or meaning behind photos he'd taken while in York earlier this year.

Underneath a picture of an old warehouse, for example, was this text:

You’ve got to love a place that’s so wonderfully blue collar that you can’t tell just by looks what businesses are actually still open or shut down. York, PA’s nickname is the “Factory Capitol of the World,” and rightly so. It’s the home of the famed York Barbell, and though there’s a retail store and museum in town, the company headquarters are in Canada and most of the products are made in China.

The mini-stories by Williamson (see his Washington Post bio page), who has shared in two Pulitzer prizes, were an unexpected treat.

I haven't figured out whether/how to use Intersect, though I usually try anything once. The site describes itself as a way to present stories that are linked by place, a way to "to share and see your stories and interests in the context of your life, showing where you are now ... and when and where you've been in the past. And who else was there."

Did you know of this or have you tried it? Let me know.
Posted by Unknown at 2:18 PM 4 comments: Links to this post 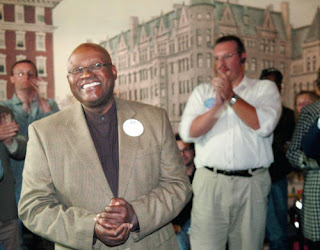 Rick Lee pulled off a kind of double-lede to his story about the death of York County Judge Chuck Patterson that I think serves the story well.

In the first two grafs, he delivers the news that Patterson collapsed and later died, though it's through the action of the flags being lowered, not an official quote, which comes later.

In the next four grafs, Rick writes about Patterson's last moments at the courthouse: His afternoon greeting with district attorney Tom Kearney, and Kearney describing what happened. It's poignant, reveals a level of respect for Patterson that is reflected elsewhere in news coverage, and it brings the story back to the point where you hear the official word about the death from the coroner.

It's a major news story that, through its construction and its key anecdote, allows the human emotion to come through.

UPDATE: Rick says he was thinking about leading with the Kearney anecdote, but thought the story really needed to be treated as a hard news story, and starting with the anecdote wouldn't do that. Hence the first two grafs. That's good thinking and decision-making.
Posted by Unknown at 12:39 PM No comments: Links to this post

Yeah, so Tell Me a Story is on its third new look in the past week or so. Sorry to anyone who's checked in and wondered where they were. I think this one will stick.
Posted by Unknown at 8:30 AM No comments: Links to this post

Gay Talese: 'It is getting it right, and then being a storyteller'

Gay Talese gave a talk on narrative at Harvard University a few days ago.

Posted by Unknown at 9:42 PM No comments: Links to this post

Email ThisBlogThis!Share to TwitterShare to FacebookShare to Pinterest
Labels: narrative

Penn State: The week that was, captured by two fine writers

In case you missed it in any of the other places I've posted links to these stories, I'd put these two pieces up against anything anyone has written about what happened last week at Penn State:

Posted by Unknown at 10:18 AM No comments: Links to this post

For Veterans Day, a video package brings together veterans from America's past and present

From our AME visuals Brad Jennings this morning:

If you're growing weary of Penn State stories, here's something a little different you can check out. For Veterans Day, Kate Penn profiled veterans from the current wars, all the way back to World War II, and conducted video interviews with them.
Sam Dellinger created an interactive presentation that you can see here.
This is a great example of multimedia storytelling. You'll notice few printed words, and short video clips. But if you watch them all, you'll come away learning a lot about a diverse group of local people.
You can see George Eyler get emotional as he remembers getting shot at in Korea. You can hear Michael Janis talk about having blood and excrement thrown at him when he returned home from Vietnam. And you can listen to Dawn Hicks describe how woman in Saudi Arabia must eat in a separate room at their local KFC so they can uncover their faces to eat.
I'm glad we were able to meet these veterans and let them share their stories in this way.


Really cool effort by Kate and definitely worth your time to watch the videos and meet these people.
Posted by Unknown at 11:02 AM No comments: Links to this post

Phrases to run away from

Check this out: A blog that says its mission is "to showcase linguistic crutches journalists employ."

It breaks 'em down, folks, with links and everything. Like "rolling in his/her grave" and "as a matter of fact."

Good stuff.
Posted by Unknown at 5:15 PM No comments: Links to this post